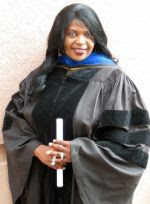 Palmer is the daughter of the late Mr. and Mrs. Howard Palmer of Bellville and a 1987 graduate of Bellville High School.

Upon graduation from Bellville High, Palmer enrolled at Prairie View A&M University majoring in music with a minor in drama and theater arts. It was while at the university that Palmer honed her musical and dramatic skills that helped propelled her to the position of Miss Prairie View A&M University in 1989. As Miss PVAMU, Palmer competed in the Miss Texas Pageant (Miss America) and later on the Miss Hall of Fame Pageant where she was fourth runner-up.

Never one to give up, Palmer entered and won the Miss Collegiate African American crown, a title that would take her on a global tour of the United States and Africa and parts of Europe in between. Palmer also got the opportunity to appear on the popular talent show Star Search and a chance to meet her musical hero, Mr.Charley Pride, where she presented him the Legends Award at the Black's in Music Award Program in Los Angeles. Palmer also performed with the likes Sinbad, Barry White and Cyndy Heron of EnVogue.

Palmer received her Bachelor of Arts degree in Theater Arts in 1992 and the Masters of Education in 2006. She entered the field of education as a teacher, mentor and program director, all the while still pursuing her career in country music. In the meantime, Palmer decided to enroll in the doctoral program and thus earned her degree. Upon graduation, Palmer relocated to Athens, Ohio to support her husband, Michael, who was attending medical school at Ohio University.

Tragedy struck the family in August 2011 with the multiple passing of her parents. To be near family, Mary and Michael moved back to Pearland, Texas, where she is teaching at the middle school level.

Palmer plans on turning her dissertation, “Living Legacies: A Phenomenological Study of Four African American Male Educational Leaders at Southwestern Historically Black College and University,” into a stage production later in the year.

She also plans to return to her first love of Country Music in full force and is currently recording in hopes of releasing another album soon. 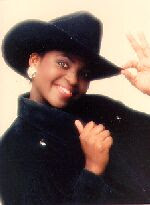 There is something excitingly different about Mary Ann Palmer: she's talented and determined to set the country music world on fire. Music lovers around the world experienced Mary Ann's mesmerizing persona and "Heart and Soul Country" charm on The Nashville Network's `Be a Star Showcase' this past January. The internationally acclaimed program exposed the new country music duality of Palmer and learned what the Prairie View Family already knew . . . that Mary Ann is star material! Additionally, Palmer's dynamic performance on the Houston's Livestock and Rodeo Show along with Gladys Knight and Frankie Beverly and Maze this February, added a new dimension to musical entertainment.

Affectionately crowned the `Princess of Country Music,' Palmer first appeared on national television when she won the Miss Collegiate African American title in 1990. In 1991, the public again got a taste of her country soul style during her appearance on Star Search, and CBS's Souls of American Music.

Mary Ann, who grew up in is one of a few African Americans who aims to put some color in country. Deford Bailey of Bellwood, opened the door in the forties when he played on the Grand Old Opry and became one of its most popular performers. Since Bailey, country music has sporadically added the sounds of O. B. McClinton, Henry Glover, Big Al Downing, Stoney Edwards, Charley Pride, Otis Williams of the Charms, and Ray Charles, to name a few. African American females who also gave the music a shot in the arm include Etta James, Linda Martel, and Nisha Jackson. The Pointer Sisters also won a Grammy for their "Lover with a Slow Hand" release, and Lionel Richie for composing and producing 'Lady' for Kenny Rogers. Currently, Cleve Francis, cardiologist turned country crooner is the only African American with a major label. Despite these entries on the scene, Pride has been the most recognizable and successful to date.

The mainstream acceptance of Country music and Palmer's international media exposure, could only help to open the flood gates for African-American singers. For instance in alone we have Mary Cutrefello, C. J. Edwards (Stoney's niece), Tammy Dee, Linda Francois and Donna B, to name a few. Of course, our African American men won’t be denied either. We have Al White and Larry Callies who have been around for some years now and are making a name for themselves too. With these artist on the horizon, it is only a matter of time before the genre will feel the impact of this diverse talent.

The competition is fierce, but Mary Ann is destined to make a difference this time with a Mo' Betta Country Soul style on her second album "Mary Ann," released by UNITAN. Her first album "Lookin' At Me" carved a niche for her. However, her vision for success is more evident on "Mary Ann." Palmer emerges with a "new brand o' country," while maintaining the signature Country & Western backdrop. The difference is her blend of musical idioms, culled from Rhythm & Blues, and gospel, to create her unique soul style. The vocal dynamics clearly embodies her Country Soul style with its cross-cultural and generational appeal. There is a full down-home country on the album from `They Don't Make Love Like They Used to' to an Africentric Country‑R&B in `Doing Lonely Time'. "Palmer gives you a taste of what real country music is like," says Rene John Sandy of Class Magazine. If similarities must be made, she's the best of both worlds--African American and Country. She is a perfect symbol of the new country music duality and a true expression of her cultural heritage.

Palmer's mesmerizing persona simply makes the connection between voice and touch. Johnny High (Country Revue) describes her as "one of the best female vocalists alive today." Mary Ann provokes thought with rhyme and reason. Her "heart and soul country" exposes the closet country listener and converts those who usually say, "I didn't like country music, but I enjoy your singing!" These qualities make her an exceptional artist in a genre, virtually void of African Americans.

Mary Ann's early influence for Country music came at age three and later fueled by Charley Pride around age ten. Palmer also admires Dolly Parton, Reba McEntire, Willie Nelson, Shirley Caesar and K. T. Oslin whose songs are staple in her repertoire. When ask, "why country music, there are no Blacks in it?" She quickly responds, "Why not country? Country is a rebirth of the blues. It is about living and the human spirit, and I'm only expressing my cultural roots in the music. Further, if Charley Pride can, so can I." Mary Ann is that kind of woman who was born to sing country. As Billie use to say, "No two people on earth are alike, and it has to be that way in music or it isn't music." Palmer's conviction is true to her inspiration. Mary Ann holds true as an artist of destiny. She wants to be to Country what Marion Anderson was to Opera - the most recognized African American female in a nontraditional genre. She wants to receive the Grammy as Country Artist of the Year.

Palmer is the former and received her Theater Arts Degree from Prairie View A&M in 1991. She also received the Sammy Award as ' Country Artist of 1992. She has appeared with Charley Pride, Dionne Warwicke, Danny Glover, Harry Belafonte', Barry White, The O'Jays and Sinbad, and the H. B. Barnum Orchestra, to name a few.

Country music will not be the same with Palmer on the scene with her Mo' Betta "Country Soul" sound that is magically hers in "Mary Ann." This album is a perfect symbol of the new country music duality Palmer hopes that major record labels and fans alike will flock. Meanwhile, Palmer is enthusiastically preparing for a major pre-Rodeo "Color Me Country Concert" set for early February 2003. The concert, hosted by the Black Country Music Association, will feature several African American Country Artists who are steadily making an impact on the music scene.